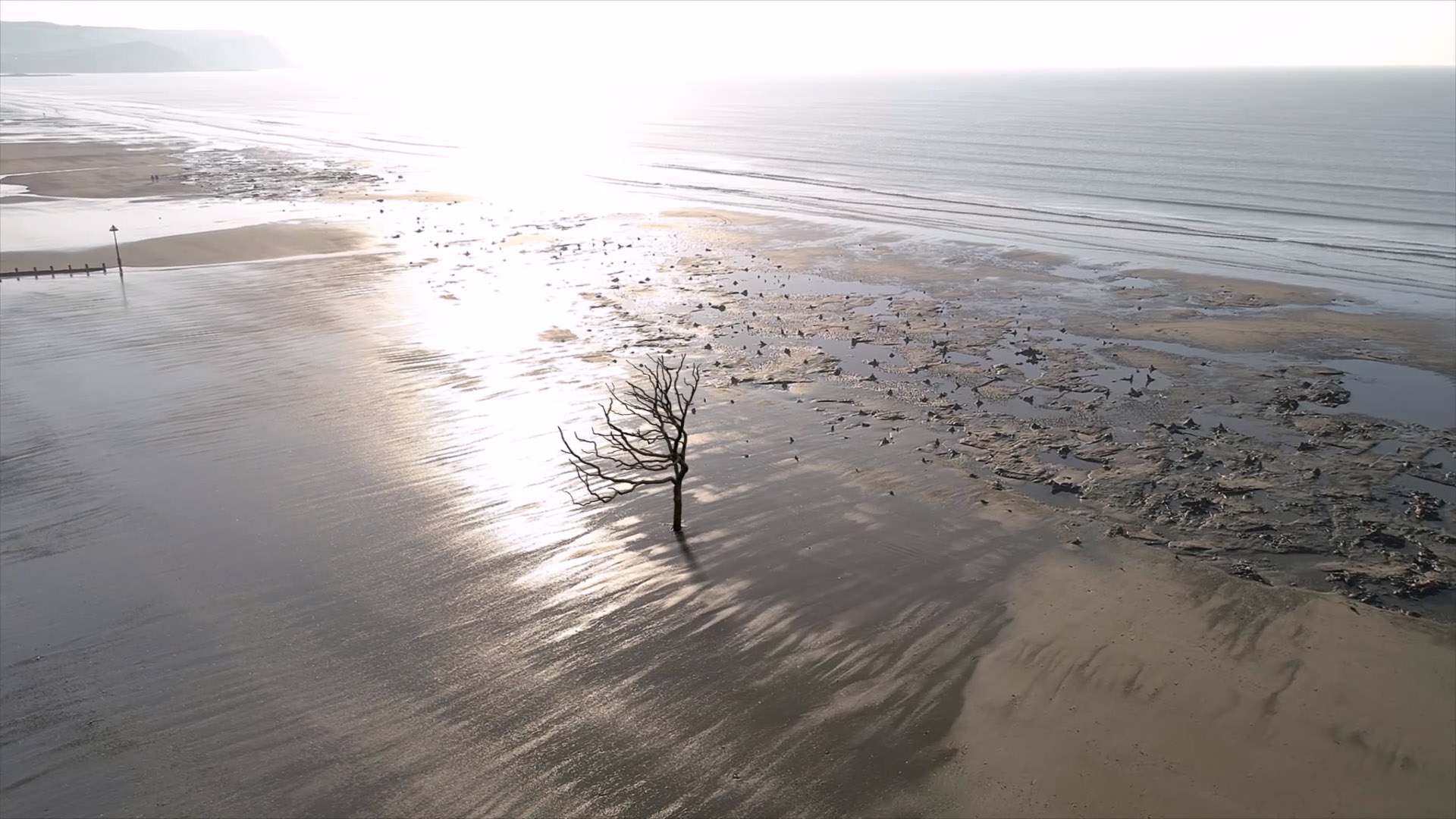 The renowned, and at times controversial, artist Robert Davies is a multi-faceted virtuoso who appropriates whatever medium best suits his subject matter; be it the passage of time, animals bred for food production, football or climate change. In recent years he has made life-sized drawings of race horses and farm animals, films about 17th century Dutch vanitas painting and large photographs of the night sky.

Robert is currently working on a site-specific artwork about sea level rise, involving the installation of the cast of a tree in the intertidal zone of a beach. There is an ancient forest buried beneath the sand on the beach between Borth and Ynyslas in West Wales. The forest dates back some 6,000 years and contains the tree stumps of four indigenous species; alder, pine, birch and oak. A rise in sea level covered the land which has resulted in the forest being submerged. Today, at low tide, gnarled and eroded tree stumps are revealed, preserved by the sand and peat in which they lie. As a contemporary artist living in the area Robert would like to emplace the cast of a single Ceredigion oak tree in the intertidal zone on the beach adjacent to, but not within, the ancient forest. Working with other artists, archaeologists, engineers, fundraisers, manufacturers and the local authorities he has recently secured permission to make a metal cast of a single tree and to site it on the beach. Titled Tree, the project will be a temporary site-specific artwork that will stand for a maximum of 7-8 years, generating discussions about climate change and, specifically, catastrophic sea level rise. Tree is about our historic past and our vulnerable future.

The initial stages of this project involved creating a replica digital model of the specific tree that Robert had identified as the basis for his sculpture. It is crucial to his vision for the artwork that the cast tree he positions on the beach is an exact copy of an existing, healthy oak tree and not just a imagined sculptural representation. Absolute accuracy and high fidelity are the cornerstone of the sculpture, so he wanted a digital version that showed every twist and turn of the whole tree and all the gnarled topography of the bark on the trunk and branches. Just to add further complications to his brief (perhaps to test the mettle of the scanning team), Robert identified his ‘perfect’ tree within an area of dense woodland located on a vertiginous hillside a few miles inland from Borth Beach. With all this in mind he turned to specialists in the creation of high resolution digital versions of reality; although this specific brief called for an integrated approach of scanning on the ground and further detailed data capture from the air.

The artist Robert Davies selected an Oak some miles inland from the beach. Our scan data will allow the manufacture of an exact copy to be used as the art installation.

The selected tree is buried within dense vegetation

Aerial LiDAR is used to scan above the canopy

His first call was to our friend and colleague Mark Beckett of internationally well respected metrology company Europac3D. Europac3D is a supplier of portable measuring  and 3D scanning systems based in Cheshire who specialise in portable close range measuring systems and 3D printing. They hold a unique position as a leader in the supply of equipment used for reverse engineering, inspection/quality control, and digital modelling; serving industries such as aerospace, automotive, medical and dentistry.

It rapidly became apparent to Mark that to fulfil the exacting specifications of this job we would have to, in his words, ‘literally throw the kitchen sink at it’ (although we didn’t actually use a sink in the end). He quickly deduced that no single piece of technology or software and, therefore, no single service provider would provide a complete digital model of the tree from the base of the trunk to tips of the tips of uppermost branches. So, as a corollary of this realisation, he picked up the phone and called us. Teams from Visualskies and Europac3D have worked together on a number of scanning and modelling briefs for clients from, for example, the rail and entertainment sectors; so there is a well developed understanding of our respective capabilities, based upon many years of collaboration.

Borth Beach on the Ceredigion Coast is the location of a prehistoric buried forest.

Remains of the buried forest

After some discussion, we decided that a combination of hand held close range scanning, terrestrial LIDAR and photogrammetry, augmented by aerial photogrammetry, gave us the best chance to deliver the required results. Our Leica P40 laser scanner, augmented by terrestrial photogrammetry, was used to capture all of the tree surfaces visible from the ground. This precise metric framework was then used as the foundation to position data collected on the accessible lower parts of the tree using the Artec Leo close range scanner. Finally, the uppermost portion of the tree, mainly comprising the top surfaces of the high up branches, was documented using drone based aerial photogrammetry. All this sounds reasonably easy and logical until you realise that it meant climbing ladders whilst carrying expensive scanners and flying drones under the tree canopy of dense woodland. The location also allowed us to further test our Geoslam Zeb Horizon aerial LIDAR technology and assess the quality of data garnered from the skies above the woodland when compared to the other methods.

The significance of combining these three different data capture technologies to create one end result cannot be overstated. Visualskies are at the forefront of using integrated aerial and terrestrial photogrammetry and LIDAR to digitise and visualise large scale sets and landscapes whilst Europac3D have years of experience in metrology, working at micron level precision to reverse engineer engineering components. Merging the differing tree data as a unified mesh model in the form of a stereolithography file suitable for downstream applications such as visualisation and physical manufacturing was a learning curve for all the team. The final result definitely bears testament to the varied and myriad expertise of team members. The tree now exists in a precise detailed digital format that preserves it for posterity. The tree is yet to be cast as a solid object and positioned on the beach at Borth, but the lasting legacy of the scanning process is a piece of digital artwork that already helps communicate and elucidate our past and the consequences of climate change. 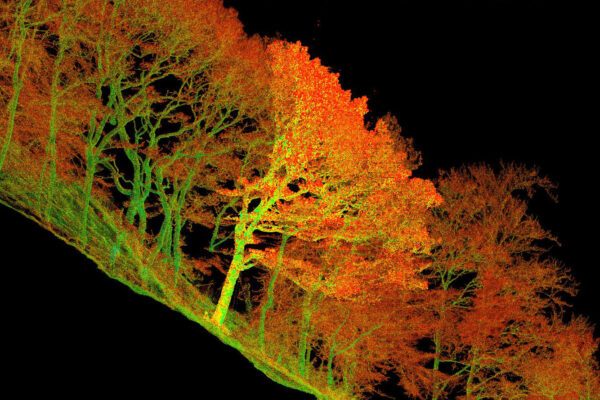 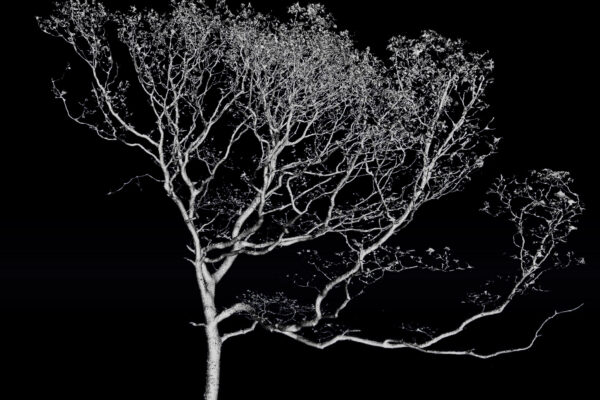 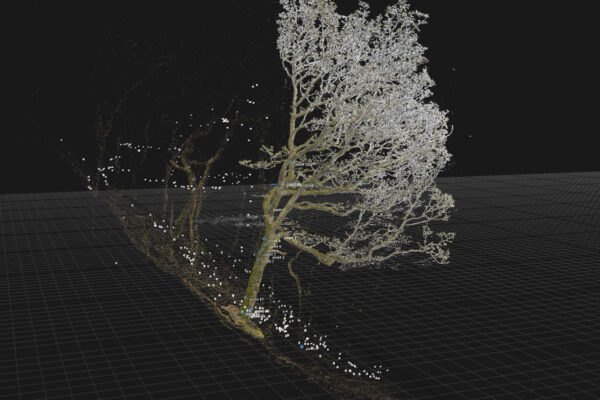 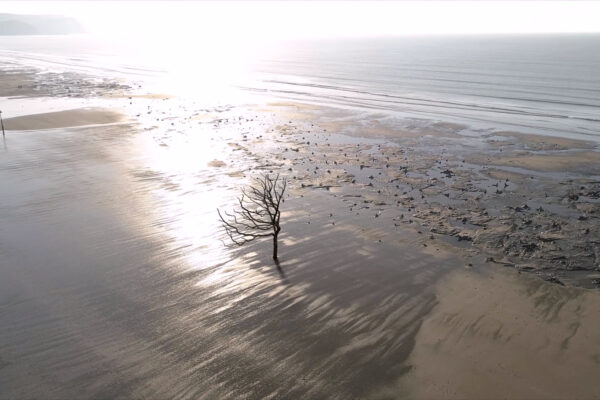 Or see the final video by Robert Davies below

I worked with Visualskies in west Wales. Professional, engaging and completely committed, their work was first class. They were still working at 9pm, checking the quality of the data capture and filming, and ensuring they were organised and clear. The results are stunning. 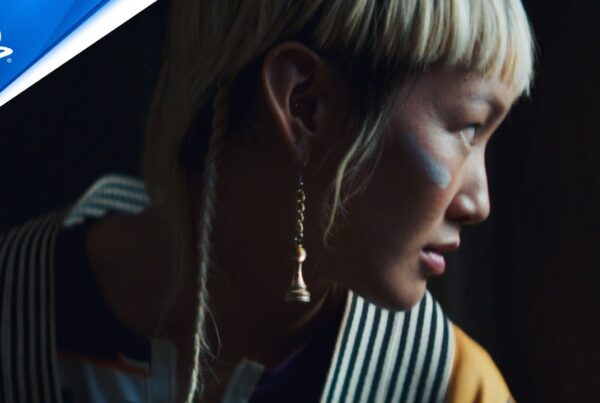